Universal Orlando’s Mardi Gras season is upon us and let’s face it, there is nothing quite like it. This year the fun is back to its full glory… meaning the award-winning concerts are back, the parades are back, and yes even the BEADS are back! Luckily for you, while the party has never been hotter, the food has never been sweeter. So, follow along as we bring you some of the tasty highlights of this year’s Mardi Gras season at Universal Orlando as we celebrate “Fat Tuesday”!

The cool thing about the first item on our list is you don’t even have to enter the parks to try it out… just slide into Toothsome Chocolate Emporium and pick up one of 3 seasonal Mardi Gras themed macarons. This year’s flavors are King Cake (pictured above), Bananas Foster, and Maple Bourbon. Out of the three, we’re declaring the King Cake Macaron… KING! Not only is this treat Instagram worthy, but it’s also super yummy too. Your friends will absolutely be green with envy, just like it’s fantastic color. Another bonus about this snack is you’ll be able to find it in various snack spots throughout Universal Studios (like inside this year’s Mardi Gras Tribute Store) for just $5. So, if you want to pick up an extra, or a handful, of these to bring back to you room at night, we won’t judge.

First thing’s first, it has WAFFLE in the title… so it’s basically breakfast and 100% acceptable to eat early in the day. The fact that there is ice cream involved is just a minor detail. It’s just a topping, right?! After all, people put toppings on waffles every single day. Plus, it has pocky sticks, which means you can have a sword fight while you wait in line for your next ride. Entertainment in a cone! But seriously, if you haven’t tried Ube and Macha ice cream you are missing out. These flavors will blow you away. Find it at the Fusion Food Truck (the bridge near Springfield, U.S.A.).

This first part is for the over 21 crowd. While February to April sees a little milder in temps in Orlando, the sun still shines brightly. So, to cool off, you might want to grab a Strawberry Caipirinha Punch. It’s made up of Leblon Cachaça, agave nectar, strawberry purée and lime juice. Sounds great right?

This beauty can be found at the Brazil booth (Café La Bamba patio) and pairs nicely with our next recommendation the Pulled Chicken Coxinha.

What is Pulled Chicken Coxinha? Well, it’s crispy, pulled chicken tear drop balls of heaven. They’re the perfect one-bite snack when you want something that isn’t sweet. They also can help you look and feel really cool if you can manage to toss it in the air and catch it in your mouth. If you miss, always remember the five-second rule. You don’t want to let one of these guys go to waste.

We’re pairing up these three on our tasty tour around Mardi Gras at Universal Orlando because they can all be found inside the Tribute Store near the Jimmy Fallon: Race Through New York ride.

I know they say diamonds are a girl’s best friend, but what about cupcakes? Tell us something a cupcake can’t do that diamonds can? Ok, sure they aren’t worth tons of money, but they can make you just as happy! This is why a simple Mardi Gras cupcake is never a bad choice and a great snack for those who are less adventurous.

The Mardi Gras Chocolate Shot: Bananas Foster is another fun option because even the “shot glass” is chocolate. It’s the perfect combo of smooth and snap. Just be sure to grab a napkin because chocolate melts.

Last in our Tribute Store highlight is the King Cake Whoopie Pie. Sure, there’s no baby inside but you’ll still feel pretty lucky when you try this out. Plus, it’s a decent size snack, so you can easily tear it in half and share with someone special. **Note while the food is fun, make sure not to rush through the Tribute Store this year. This year’s theming is set up like a Float Factory. Plus, the Tribute Store is packed full of fun gifts you can bring home!**

You know the famous saying, “You can’t spell Mardi Gras without crawfish.” So, it’s not an actual saying but you get the point. One of the best things about Louisiana cuisine is the CRAWFISH, so a trip to Universal Orlando’s Mardi Gras requires just that. Which is why our last snack to highlight is the Crawfish and Shrimp Boil, which can be found at Battery Park booth. It’s complete with crawfish, shrimp, andouille sausage, red bliss potatoes, and corn on the cob (a vegetable right?!) so it’s delicious AND nutritious! Look at you adulting!!!

One change to note to this year’s Mardi Gras tasting experience is how you can “prepay for your snacks.” In past years a tasting lanyard was available for purchase. This allowed you to “prepay” for specific amounts of samples you would like to try at the Mardi Gras booths. This year Universal Orlando has opted to utilize a Food and Beverage Card. This card has 2 options. You can choose to pay $65, but your card will be valued at $75 (a bonus of $10) in food and drink credits or pay $120 for your food and beverage card to snag a card valued at $150 (a bonus of $30)! These credits can be used throughout all of Universal Studios and Universal’s Islands of Adventure! That means you aren’t limited to using your fund on the Mardi Gras booths only.

While these cards can NOT be used at your hotel, if you have leftover credits, these credits never expire. So, make sure to bring them back on your next Universal Orlando getaway!

Are you hungry now? Cuz we are!

So, grab your friends… grab your family… and maybe some stretchy pants too because this is just the tip of the delicious food and offerings this year’s Universal Orlando Mardi Gras season has in store. You don’t want to miss this chance to live like Mardi Gras royalty and “eat like Kings!”

Ready to start planning your trip to this hopping party? Contact your MMV agent or click here for a free quote!

As a travel agent with Magical Moments Vacations, my services are FREE. That’s right..booking with me won’t cost you a penny more than booking your vacation on your own! The difference?

My name is Hannah Head. 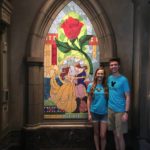 My wife and I recently traveled to Disney World with Hannah’s help and had an amazing time. We did what...

My wife and I recently traveled to Disney World with Hannah’s help and had an amazing time. We did what amounted to just a weekend in FL and Hannah was incredible at helping us plan our time, learn all of Disney’s tips and tricks, and hit everything we wanted to in our short time available. Would highly recommend her and will definitely be asking her to help us again when we go back!
https://adventuresbyhannah.com/testimonials/mcilvoy-vacation/

Hannah helped us plan our family’s week-long Christmas Vacation to Disney World last December (2017)! This was when she was...

Hannah helped us plan our family’s week-long Christmas Vacation to Disney World last December (2017)! This was when she was working as a cast member for Disney World, and having been there for 5 months prior, she knew the parks exceptionally well! For starters, after we told her we’d be doing the Disney 4 day Any Park Pass, she coordinated Fast Passes for highly popular rides on those days. That then helped us decide what order to go see the parks. For the most part, we only went to one park a day, but she also planned occasional special evening events at other parks (like parades, firework shows, etc). She also suggested we spend an extra $15 on wristbands that keep track out our individual accounts which listed our park pass, Fast Passes, character pictures from the park, starred or interested events, and wait times for rides to say the least. She introduced us to the Disney Park App which gave us a visual of the parks and or accounts! During days in which we didn’t go to the parks (4-day pass, week-long vacation) she gave us suggestions on places to see nearby, like the Disney Springs shopping center! We practically spent a whole afternoon and evening there window shopping and buying things! I myself was looking for a very specific gift for a gift exchange and she knew of the only two locations where the gift might be found: inside the Magic Kingdom or at Disney Springs. I found it at Disney Springs! On the rare occasion that plans didn’t work out (my wife had difficulties with her entry pass), Hannah worked with the customer services to resolve the issue quickly. She even showed up to the park one day to talk with the customer services face to face! Hannah...
https://adventuresbyhannah.com/testimonials/mire-family-vacation-2017/
2
Adventures By Hannah